Here you will find all the latest information and News.

Chemical Plant Explodes Near Dallas Because Worker Drags His Shoe? 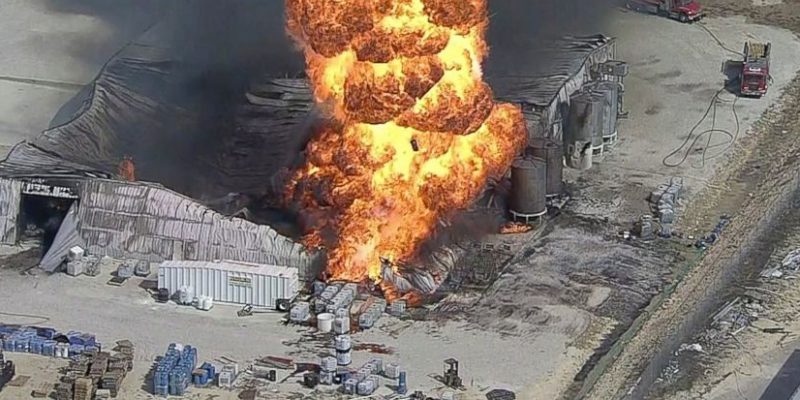 An explosion at Tri-Chem Industries plant in Cresson, Texas, roughly 50 miles southwest of Dallas, is thought to have been caused by a worker who dragged his foot along its factory floor. The Associated Press reported that “the worker who dragged his foot while chemicals were being mixed caught fire from the waist up and was airlifted with critical burn injures to a Dallas hospital.” The static electricity caused an explosion that injured two workers, and one worker, 27-year-old Dillon Mitchell, is missing and believed to be dead.

Cresson Mayor Bob Cornett told The Associated Press that nine emergency-rescue and fire departments responded to the explosion, including a hazmat crew from the Fort Worth Fire Department. Responders were initially evacuated because the risk of another explosion was too great. Crews were only able to enter after the plant’s metal beams caved in, the roof collapsed and the fire was limited to only a few active areas. Once these flames died down they searched for Mitchell on Thursday night unsuccessfully. Searches resumed again today.

Tri-Chem Industries mixes chemicals primarily used by the oil and gas industry to drill disposal wells. A Texas Commission on Environmental Quality spokesperson told an AP reporter to file a public information request to find out what chemicals were on site. The agency is responsible for coordinating the cleanup. The AP argues that Texas lawmakers have made “it increasingly difficult for the public to find out about the chemicals manufactured and stored at such plants.” It writes:

After a fertilizer plant explosion in the city of West, Texas, killed 15 people in 2013, Greg Abbott, who was then attorney general and is now governor, ruled that state agencies could withhold information about hazardous chemicals because of “ongoing terroristic activity.” NBC 5 News reported that 12 people work at the Cresson facility, which opened about a year ago. No other injuries were reported and it hasn’t been made public how many people were at the facility on Thursday. Witnesses reported seeing “big fireballs” shooting out of the building.

Cornett later clarified he surmised the explosion was created by static electricity but could not confirm with absolute certainty that that was the cause. The cause of the fire and explosion won’t be determined until after the investigation is concluded, which cannot begin until the entire fire is out. Cornett added that workers wear special shoes in order to reduce or eliminate static discharge, so his initial statement may be wrong.

The Texas Center on Environmental Quality (TCEQ) is assisting first responders and coordinating with Hood County, EPA responders, and Fort Worth hazmat to deal with discharges from the site and monitoring the air quality. The wind carried black smoke and fumes from the plant away from residents, but the mayor said that the city could issue an evacuation order if the wind changed its direction. The TCEQ is responsible for cleanup efforts and the State Fire Marshal’s Office has been asked to investigate the cause of the fire.